A Timeline of Future Technology

Making predictions about future technology is both fun and notoriously difficult.

However, such predictions also serve a very practical purpose for investors and business leaders, since failing to adapt to changing industry paradigms can completely decimate a business venture, turning it into the next Blockbuster, Kodak, or Sears.

Today’s infographic from Futurism rounds up some of the most interesting predictions about the future, from trusted sources such as Scientific American and The National Academy of Sciences.

The confluence of robotics, artificial intelligence, and increasing levels of automation is a prevailing trend throughout the projected timeline of future technology.

In less than 10 years, we will be able to control machines based on eye movements, while ingesting nano-sized robots to repair injuries from within our bodies. Later on, it’s also expected that the next wave of AI will be a reality: by 2036, predictive AI

The freezing cold and no million dollar signing bonus would be enough to send me to Silicon Valley.  I grew up next to Lake Michigan and I'd take West coast weather any day..........unless there was more money involved.  Yes, I can be bought. *lol* 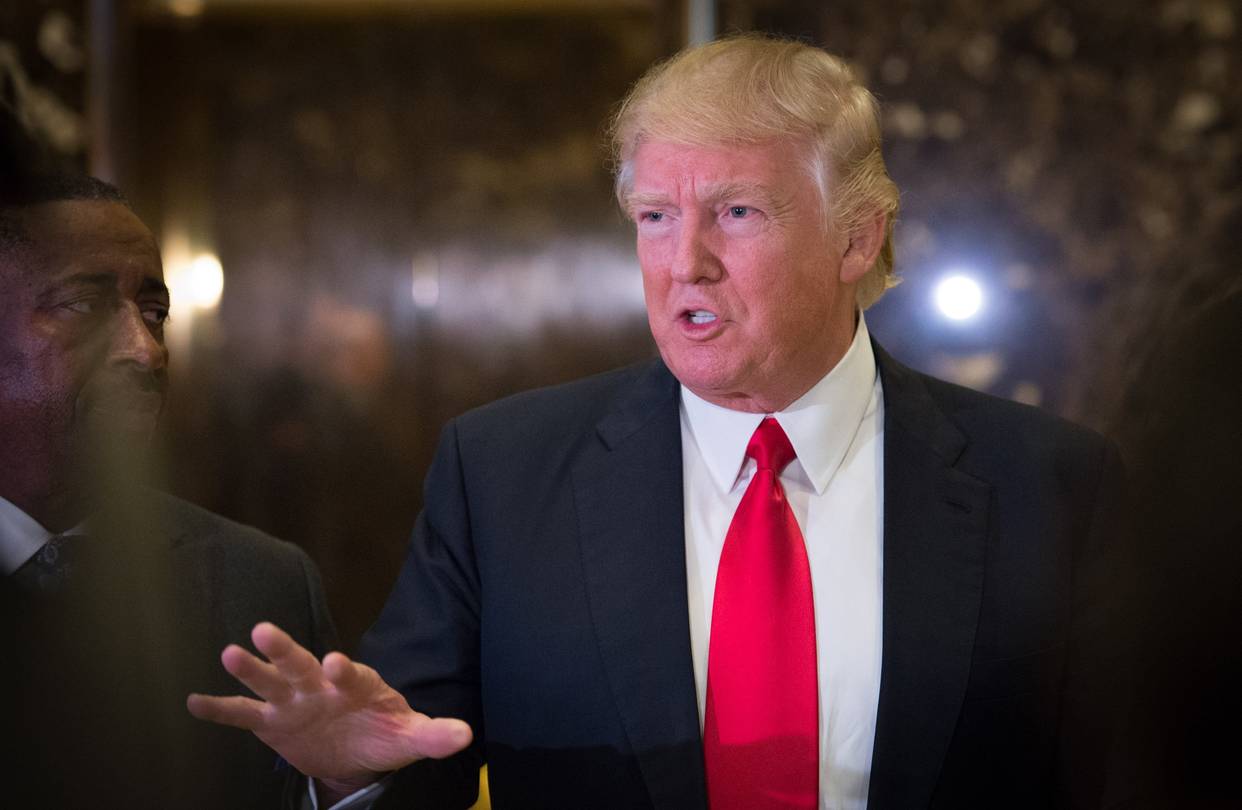 He also said he wouldn’t commit to America’s agreement with China that Taiwan wasn’t to be recognized diplomatically, a policy known as “One China,” until he

The image was startling, but a look into what could be tech's immediate future.

After being ostracized by the tech industry for most of the election year, there sat venture capitalist Peter Thiel, beaming, to the left of President-elect Donald Trump at the Trump Tower Tech summit in mid-December.

Silicon Valley's billionaire leaders had disavowed Trump during the campaign, throwing their weight behind rival Hillary Clinton. Only Thiel stumped for the real-estate mogul, and after the tech industry had turned on him for that and his role in Gawker's failure, he was luxuriating in the I-told-you-so moment.

The display of power portends a roiling year or two in tech. Trump railed against Amazon and Apple in tweets about corporate taxes and cyber security; now, he's likely to shape those issues as well as immigration reform,

Get ready for the era of augmented humanity.

Global research powerhouse IDC says the next era of IT transformation will marry technology with biology to take the human mind and body to unprecedented levels of mental and physical capability.

That was one of the top worldwide IT predictions for 2017 as outlined Tuesday by Frank Gens, senior vice-president and chief analyst at IDC.

Gens dubbed IDC’s augmented humanity concept its new “fourth platform.” Over the past few years, IDC has been laying out its view of a “third platform” consisting of cloud, mobile, social and big data/analytics. As described by Gens on Tuesday, the fourth platform of augmented humanity pushes the current wearable technology trend beyond skin-deep layers into “cellular and sub-cellular levels” of our biology.

Major tenets of the fourth platfo

Sometimes the world is not yet ready for a new technology to enter the fray.

Virtual reality, for example, sat on the sidelines for many years. The industry went into hibernation around the time of the Dot Com Bust, and it has only recently re-emerged with promise.

It is only today that big companies like Microsoft, Google, Samsung, HTC, and Facebook have the infrastructure, peripheral technologies, and capital in place to properly commercialize the technology. Now, instead of using primitive 300 x 200 pixel LCD displays that were prohibitively expensive in the 90s, we are looking at a world where display will be in beautiful 4k quality. Meanwhile, accelerometers and gyroscopes can measure head movement, and modern computing power can reduce lag and latency. It took many years, but finally the true potential of VR is being realized.

Like virtual reality, there are 10 other emerging technologies that are finally ready for prime time. Some, like the recent advances in artificial intelli The computers have won.

Institutional Investor just released its annual list of the top-earning hedge fund managers, and six of the top eight are quants, or managers who rely on computer programs to guide their investing.

In 2002, by contrast, just two computer-driven investors were included in the ranking, according to Institutional Investor.

The list highlights just how hedge fund investing has changed over the past 15 years.

It is not that the brash, characterful traders of old are a dying breed. There are still plenty of alpha-male risk-takers in a company gilet wandering around New York and Greenwich, Connecticut.

It's just that they're losing ground to tech specialists who program robots to play air hockey in their spare time.

In addition to charts I uploaded (which there are many more but I'm short on time, it being a holiday) here are a few of my weekend email reads I found interesting. Enjoy - and Happy Easter.

Once known mainly for its low-cost manufacturi

In the Industrial Revolution of the late 18th and early 19th centuries, one new force changed everything. Today our world is undergoing an even more dramatic transition due to the confluence of four fundamental disruptive forces—any of which would rank among the greatest changes the global economy has ever seen. Compared with the Industrial Revolution, we estimate that this change is happening ten times faster and at 300 times the scale, or roughly 3,000 times the impact. Although we all know that these disruptions are happening, most of us fail to comprehend their full magnitude and the second- and third-order effects that will result. Much as waves can amplify one another, these trends are gaining strength, magnitude, and influence as they interact with, coincide with, and feed upon one another. Together, these four fundamental disruptive trends are producing monumental change.

1. Beyond Shanghai: The age of urbanization

As first reported by 9to5Mac, Apple has been bringing on board experts in sensors that monitor the human body. They’re from companies like AccuVein, C8 MediSensors and Senseonics.

The wearable technology market is expected to grow immensely in popularity in the next few years: one firm estimates the 500,000 smartwatches that have shipped so far this year will explode to 5 million units by the end of 2014. The optimism built into the numbers comes from the long-held assumption that Apple will do its own smartwatch. But lots of big consumer electronics companies will help bring the devices into the main stream: that may include Microsoft, Motorola and Samsung, in addition to entries from smaller, niche companies like Pebble.

But wearable computing includes far more than watches. There’s Google Glass, of course, and simple fitness-tracking, wrist-worn devices like Nike’s, and products from Jawbone, Fitbit and others. Clothing with sensors in them will be part of the mix too, like Heapsyl We've spoken of this from time-to-time in Chat and I never leave feeling very reassured for my children's children.

Remember the milkman?  The corner newspaper paperboy?  The assembly line workers at Detroit automotive plants?  How about the shrinking postal service and empty ghost plants that were once steel mills?   Then there are travel agents and printing press operators; both almost eliminated at this juncture.

As we speak, millions of algorithms created by computer scientists are frantically running on servers all over the world, with one sole purpose: do whatever humans can do, but better.  According to some, the displacement of labour by machines and computer intelligence will increase dramatically over the next few decades. Such changes will be so drastic and quick that the market will not be able to abide in creating new opportunities for workers who have lost their jobs, making unemployment not just part of a cycle, but structural in nature and chronically irreversible. I

My infatuation with technology, internet, and social media companies has passed for the most part. I rarely pay attention to any of them. I will admit to keeping one eye on Google and Amazon. Google has a moat that isn't easily overcome. Amazon is really a low cost retailer that interacts with it's customers through the internet. Let me restate that, Amazon is THE low cost retailer, the Walmart of the internet, so to speak. All that being said, you must be asking yourself “Why in the hell is he writing a blog about Pet Med Express?”. Let me give you some background on how I ended up here, writing this.

As many of you know at StockBuz, I use the Vuru website frequently while researching companies. It provides some nice tools and the price is right, free. Anyway while visiting the site and scanning the discussion area, I came across a post by user Alexleroi about Pet Med Express (PETS). Generally I find that user's posts very insightful. In the post, he pointed out two major issues with