Past tense; that is.  A big move is coming in the S&P 500 and it will take everyone’s breath away. Simply put: The S&P 500 has traded in a multi-year consolidation range with a high of 2134 and a low of 1810. A breakout or breakdown out of this range could result in a measured technical move of the height of the range, i.e. 2134 – 1810 = 324 handles. Consequently a break toward the upside would target 2458 (15% above all time highs) and conversely a breakdown would target 1486 and represent a 30.4% correction off of all time highs.

I’ve outlined the bear arguments in detail in Feeding the Monster, so I won’t bother rehashing them here. However, in analyzing the larger market structures an interesting duality is emerging: A fight for control between the historic precedence of earnings and technicals and a very much divergent development in money supply, one of the key drivers behind stock prices since the financial crisis.

This duality can be summarized in one chart: 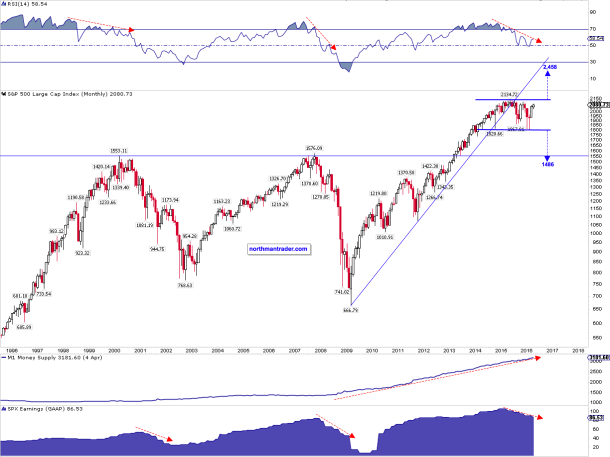 Speaking for a bre This is one of the stranger things we've seen recently.

The research team at the San Francisco Fed earlier this week published a letter analyzing one startup's analysis of Fed communications.

Economist Fernanda Nechio and researcher Rebecca Regan looked at data from Prattle, a textual analysis specialist, as part of an examination of the Fed's communication strategy following the financial crisis.

The short of it is that Prattle was accurately able to predict what the Fed's infamous "dot plot" would look like upon its next release.

Since 2012, the Fed has released a Summary of Economic Projections (SEP) — which contains economic projections from meeting participants — after every other Federal Open Market Committee meeting. The SEP also includes the dot plot, which is an aggregated forecast of where Fed officials see interest rates at various points in the future.

Over the years, it's become essential (to me) to understand monetary policy and money flows across the globe. With all of the recent 'pining' over whether the Fed will begin to raise rates this year, I felt this piece from Financial Times gave a great representation of who is worried over what, and why.  I truly recommend you give if it a read.  There's also more discussed on this article.  Enjoy.

Why is the Fed considering raising interest rates now?

America has seen its longest private sector hiring spurt on record, and unemployment has halved since its peak. The Fed thinks the hot jobs market could spur a pickup in inflation and wages. Given it is tasked with keeping inflation low, it is considering raising the cost of borrowing to keep the economy on an even keel. Why have rates in the US been held so low for so long?

The US was hit by the crash in its housing market and banking sector between 2007-09. The Fed felt it needed to pull out all of the stops t

(Edited 2:00pm)  I especially enjoy the part when the commentator withdrew his request for an interview after Schiff refused to blame everything on China.  Yes, MSM wants us to believe it's all China's fault.  Don't drink the koolaid.  Use your head.

While main stream media does their level best to keep us hugging our equities, they seem to ignore the fact that quantitative easing ran the market up from 2009 and while the economy has come a long way since the bottom, maybe, just maybe, it's strong enough to sustain us, but not equities at elevated levels.

Federal Reserve officials have signaled they think the economy is robust enough to withstand a round of interest-rate rises starting this year. But the bond market still seems skeptical.

While yields on short-term Treasury notes have started moving higher in anticipation of an interest-rate increase as early as September, yields on longer-term debt have remained stubbornly low. That is a sign that many investors are still doubtful about the health of the economy, and the ability of the Fed to keep raising rates without jeopardizing growth.

On Tuesday, yields on short-term U.S. Treasury notes rose after a Fed official sounded the latest all clear for a rate rise as soon as Septembe

The majority of sector ETFs closed their week below their 50d with energy having filled the gap.....and found sellers waiting there.

SPX itself found sellers at $2100 (clearly we weren't the only ones selling) which is 17x earnings.  More and more are accepting reality that earnings have dropped the most in six years and the Fed (with no QE) will most likely begin to slowly raise interest rates in September.  Don't believe me, just ask Barclays.

As global central banks continue their race to devalue their currency in hopes of supporting their own weak economies (most recently Bank of Israel unexpectedly cutting their base interest rate overnight by 15bps from 25bp to 10bp) global money flows continue to seek safe haven in the U.S. dollar.  And everyone agrees there is no end in sight near term.

In fact the daily chart is in a beautifully, tight bollinger band squeeze which I feel is going to break even higher.

Pressure looks to continue for large cap multinationals as currency strength will continue to pressure balance sheets with overseas sales.  A great time for the consumer to take a vacation across the pond however as your greenback outperforms every currency out there.

Bragging rights in a weak economic recovery.  You have to take it when you can get it. Stock markets have enjoyed a banner half-decade, forcefully reclaiming the ground lost to the financial crisis, and then some. This vigorous performance has occurred thanks, above all else, to two key enablers: surging earnings and recovering valuations. On the surface, there is nothing especially questionable about either. Earnings naturally rise as economies grow, and valuations recover as risk aversion fades.

However, a closer examination reveals a significant vulnerability within this cozy equation. Corporate earnings growth has been, in a sense, too good – persistently outpacing both revenues and the economy. This has driven profit margins to multi-decade highs.

Worryingly, profit margins have long been assumed to be mean-reverting, arguing that these juicy gains may eventually have to reverse. Such a scenario would necessitate an eye-watering one-third decline in the S&P 500. With stakes as big as these, a clear sense of the downside risk is imperative. This report evaluates th

The ECB left its key lending rates at record low levels, and the four-week moving average for initial claims is at an eight-year low.  That sounds like a pretty good setup for a stock market that worries about earnings prospects tied to a stronger dollar, loves the thought of central bank policy rates holding near the zero bound, and is anxious to see evidence the U.S. economy is gaining momentum.

Despite the setup, it has been a swing and a miss so far for the stock market, which has once again been greeted with steady, and broad-based, selling pressure.

ECB President Mario Draghi is getting a lot of blame for the disappointing price action based on reports that his presentation regarding the ECB's asset-backed securities purchase program was lacking and the impression from today's press conference that the ECB's ability to change the economic dynamic in the eurozone is also lacking.