In my typical day I read 20+ articles pertaining to the the stock market and investing.  Only occasionally posting one here which stands out in my mind but one yesterday at Sober Look caught my eye.  It's author begins right off the bat with "The United States is not building enough homes to meet the nation's housing demand." and I almost spit out my tea.  Not building enough homes when you compare the aging ones being thrown out versus the new ones being constructed or are we looking at what a consumer can afford to buy?  He is clearly in the camp that we should crank out more housing which would cause prices to drop at some point and suddenly "Joe the Plumber" will move out of his apartment an into a new home.  I simply don't buy that scenario.

Anyone with even a little information on the market knows that the middle class has been hallowed out (and may continue) and guess what?  Those lost jobs, whether lost to technological advances or shipped overseas, are NOT coming back.  Period.  It's done.  We do not suddenly stop and revert backwards, throw technology out the door and begin to hand out huge pay raises to bring people back to the income levels they saw 10 years ago.  It's not going to happen.  If any jobs sent overseas DO return, they will be few and at lower wage levels.  Mr. Market needs to keep up that profit you know. The market shifts and adapts to the new reality and the new reality shows heavy student debt, low paying jobs, kids and Grandma with her pooch moving back in with Mom and Dad...........and that's not going to change "now".  Plain and simple.  The new reality is right here.

Here we take a look at how long you much work to afford that rent.  Courtesy of Washington Post if you live here in Texas, you must work 70+ hours a week to afford that two bedroom apartment.  Who has money left over to save for a home?  If you're in Hawaii, don't even bother sleeping.  It's gone full retard, and Sober Look believes building more will solve it all?  Good luck with that. Of course rents have been heavily trekking higher since the financial crash.  Even though "pay" has decreased, the banks (or rich folk) owning your 2 bedroom are raking in the profits.  Why not.  It's because they can. 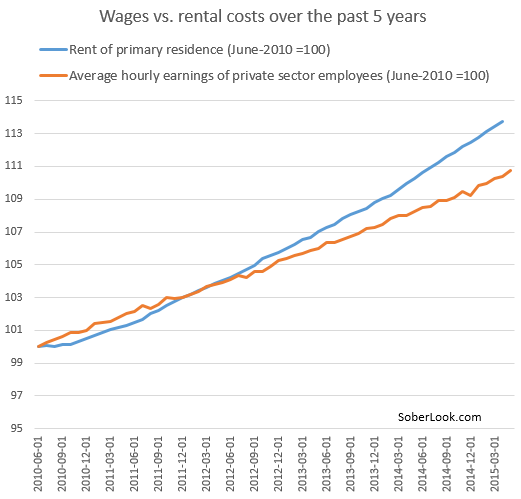 Sober Look almost to "get it" here:

This leaves an increasing number of households "behind", with millions more now spending over half of their income on rent. Unless construction ramps up materially over the next five years, the gap in the chart above will widen to crisis levels, putting significant pressure on family formation, raising homelessness, and dampening economic growth. 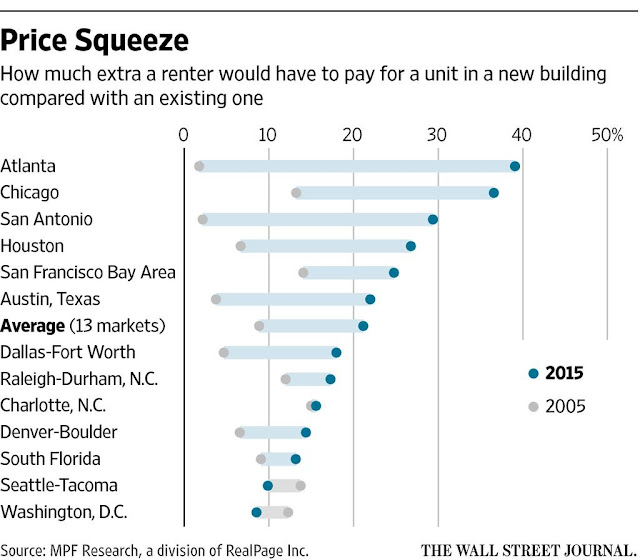 What we're seeing is rents increasing faster than home values because it takes years to get multifamily homes built.  You can say that's one of the negatives of long term interest rates remaining so low and why we're seeing such a lag in the housing market.  Take a look at negative equity.   Approximately 19% of all homes with a mortgage, are still under water.  Understand that 1-2% is considered the norm and now you'll have a headache beginning.  We're six years into a recovery an you still don't have enough equity to sell your home.  There's still an overlap of sellers (a sellers market) and there's not much you can do but pray and wait and wait and wait.

That's a lot of sellers waiting to get in the market and sell but let's say you refinanced to 2.5% so you're o.k. and in a few years, your value is up enough you can sell.  Great!  Now you're going to see buyers trying to step in but will interest rates be as low?  With higher interest rates (let's say 5.5%), the process will drag because the new payment is higher than what you're shelling out = hence the negative effect of long term low rates.  It'll bite you at some point.  The question is "when".

Of course is it cheaper to stay and rent and what's the price of a new rental?  If we're seeing millions spending over half of their income on rent, will new construction help bail us out?

Wouldn't it have been nice if earnings had kept up with price increases but that doesn't help the bottom line.  Obviously this varies by region but this "is" the new reality,  Prices rise and earnings are not - or only minimally.  The expansion we saw from 1970-2000 is gone.  I'm trying not to get political here but it is what it is.  The new reality.

It would be nice to double multifamily new construction and see rents fall.  It'd be nice to see 3% rates forever, everyone buys a home and pay raises for all.  Do I think it's going to happen?  Not any time soon.  There's not much profit in it.