0
I'm crazy to do this, but it sure looks like the Great Bond Bull Market has ended and we are in the early stages of another bond bear market. 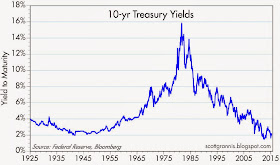 The Great Bond Bull Market started in the fourth quarter of 1981, after the 10-yr Treasury yield hit an all-time of almost 16%, and about a year after the year-over-year change in the CPI hit a post-Depression high of almost 15%. It most likely ended 31 years later, in July 2012, when the 10-yr yield fell to 1.4% at the height of the PIIGS crisis, and three years after the CPI hit a post-Depression low of -2.1%. 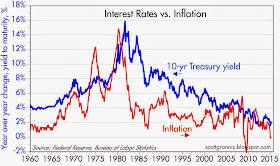 As the chart above shows, inflation is arguably the principal driver of yields.

By the way, the first bond bear market of the current century started in 1950 and also lasted 31 years. The bear market that is now beginning to unfold will undoubtedly also be many years in the making, and we can only guess at how much yields will eventually rise. I certainly hope they never get as high as they did in the early 1980s, and I don't expect they will. 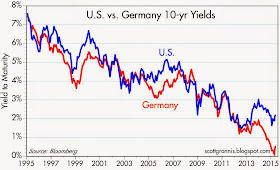 What prompted me to make this call? It was the recent 47 bps bounce in 10-year German bund yields, off of an incredible low of 0.05% a few weeks ago. Germany, not Japan, can now lay claim to the lowest 10-yr bond yields in history. As the chart above shows, U.S. and German 10-yr yields  have been tracking each other pretty closely for a long time, but they diverged significantly over the past year or so. Last month the difference between the two hit an all-time high of 190 bps; German bunds were in the grip of a buying panic, spurred in no small part by intense fears of a Greek default and also by fears of deflation, that subsequently evaporated (a Grexit needn't be an earth-shattering event, and oil prices are up over 30% in the past three months). Since conditions in Europe are not significantly worse than in the U.S., we'll probably see the gap between U.S. and German yields narrow, with German yields rising more than U.S. yields over time. Welcome also to a new German bond bear market.

So here's the big question: does a new bond bear market also mean an equity bear market? My answer: not necessarily, and most likely no. For the next few years, yields are likely to rise only to the extent that economic optimism and nominal GDP expectations rise. Rising yields will be the result of stronger nominal growth, not the nemesis of stronger growth. Besides, the U.S. economy has plenty of room to grow, as I argued last week. 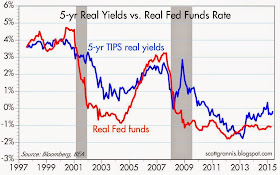 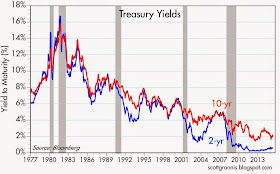 The time to worry about rising yields is when the Fed is tightening and the yield curve is flattening. The two charts above help explain this. In the first, we see that recessions are preceded by a Fed tightening which lifts the real Fed funds rate above the level of 5-yr real TIPS yields (i.e., an inversion of the real yield curve). We see the same story with nominal yields in the second chart: recessions typically follow a period in which short-term interest rates rise enough to equal or exceed long-term rates. Currently, we are probably years away from either of these events happening. The Fed is still extraordinarily accommodative, since real short-term yields are decidedly negative, and they have all but assured us that they will move slowly to tighten. The chart below sums it up: every recession in the past 50 years has been preceded by real short-term rates of at least 3% and a flat or inverted yield curve. Considering that core inflation is currently running about 1.5%, the threat of unpleasantly tight money is at least several years in future. 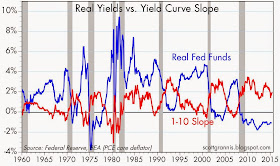