This from one of my favorite bloggers who has been investing for over 40 years, StockChartist.

Even though it feels frustration looking at a chart that stretches years, I find it worthwhile to periodically update the "Regression to the Mean" graph because it helps keep our expectations in check. Whether today we are bearish or bullish about prospects for the market's near-term future, this "Regression to the Mean" will help moderate our views and help contain them within the realm of possibilities.

First, some background is necessary and warranted. I had accumulated monthly statistics on the S&P 500 Index going back to 1939 while working on my book, Run with the Herd, during the Financial Crisis Crash in 2007-08. What I had discovered was that when viewed within the broad sweep of history, the market had risen risen at a 7.5% rate, through bull market and bear, war and peace, economic boom and bust. In order to be able to make that statement, I added a boundary 44% on either side of that 7.5% average annual growth rate. Two, longer than 10-year secular bear markets during that 70 year history carried the Index from the upper boundary across the mean to the lower boundary.

After briefly crossing the upper boundary at the end of the Tech Bubble in 2000, the Index approached the bottom boundary in 2009 and lead me to conclude that the Financial Crisis Crash was approaching a bottom (click image to enlarge): 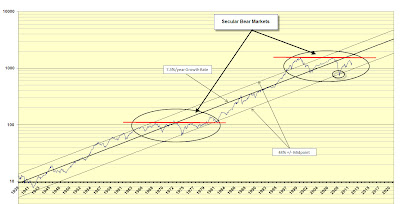 Today, the question to answer is what might be reasonably expected for the future? One model might be the exit from the previous 1969-1982 secular bear market. There are many similarities between that period and today: domestic economic, monetary and fiscal concerns, unpopular government leading possible change of administration. The major dissimilarity is the diametrically different interest rate environment.

If one superimposes the market's track from the 1974 low on to an extrapolation from the 2009 low, one gets the following picture of what might be reasonably expected in the future:

The market started to face some headwinds and retreated as the country faced an election in 1980. It wasn't until two years into the Reagan Administration that the market crossed above 1000 and began the long, 20-year bull market run.

As you can see, the market has been tracking fairly closely to the exit process back in the '70's so far. If that track continues for the near-term, we shouldn't expect the market to approach the all-time high of 1365 until 2015 and not successfully cross above it until 2017. Let your hearts not lose hope because if it continues following the track then it could reach 3000 by 2020.