Once known mainly for its low-cost manufacturing, China became a prime target for many U.S. companies bent on growth owing to its huge population, which amounts to 20% of the global total. But the country is no longer merely a consumer and manufacturer of products conceived abroad. Local companies are coming up with homegrown designs for mobile devices, PCs and other products, and some are beginning to court global markets largely dominated by U.S. companies.

In smartphones, where China ranks as the world’s largest market, Xiaomi Corp. and Huawei Technologies Co. have used attractively designed and priced products to take the No. 1 and No. 2 sales positions. Chinese brands, in fact, accounted for four of the top five brands in the country in the second quarter, researchers at International Data Corp. found.

Apple Inc., at No. 3, is still enjoying brisk iPhone sales and generating big profits in China. But Samsung Electronics Co. is no longer among the top five suppliers there, according to IDC. Troubles in its mobile unit have triggered declines in net profit for five straight quarters.

Slowing demand hasn’t helped. Smartphone shipments in China fell 4% in the second quarter year on year, Gartner Inc. said, marking the first-ever decline there. IDC this week cut its forecast for unit growth in 2015 to 1.2% from 2.5%, down from 19.7% in 2014.

The flagging domestic market is encouraging some Chinese phone vendors to look abroad for sales. Xiaomi, for example, has begun selling smartphones in Brazil and India. Huawei, which has long operated around the world, sells half its smartphones outside of China and is making a particularly aggressive push in Peru and other South American countries.

“You walk around Lima and you see Huawei almost everywhere,” said Ryan Reith, an IDC analyst. 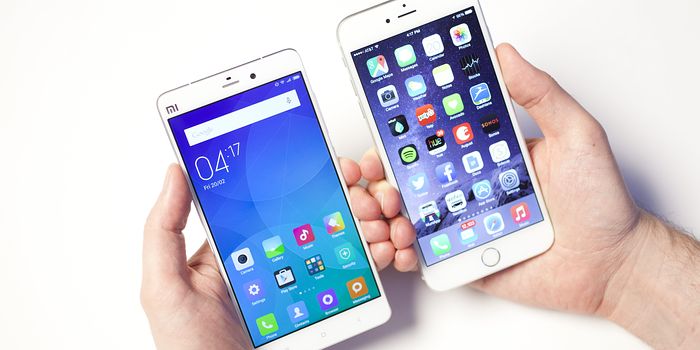 Xiaomi has used attractively designed and priced products to take the No. 1 smartphone sales position in China, where Apple ranks No. 3. Above, the Xiaomi Note, left, next to an iPhone 6. Photo: Peter Earl McCollough for The Wall Street Journal Chinese vendors that once relied mainly on low-cost manufacturing have realized they can do better if they handle design and other chores themselves, said Sung Won Sohn, an economist at California State University Channel Islands. “The money is in design, distribution and marketing,” he said. In servers, for example, China’s Lenovo Group Ltd. reached No. 1 in its home country after completing the purchase of IBM’s high-volume server line. Lenovo’s server shipments in China more than doubled in the second quarter, IDC estimated. Huawei, which ranked second in China server sales behind Lenovo, posted a 30% jump in sales. H-P, the world’s largest server maker, grew just 9% in China in the quarter and ranked fifth in the market. Dell Inc.’s unit shipments in China fell 2.5%.

The sheer scale of the Chinese market makes such trends worrisome for foreign companies. The country is expected to spend about $211 billion this year on information technology excluding telecom services, IDC estimated before the recent economic gyrations. That is second only to the U.S., and accounts for about 10% of total global spending.

The stakes are high for startups as well. China has attracted a mob of Silicon Valley upstarts, some of which have been banking on money from Chinese investors or raising money on the prospect of sales in the country.

The Chinese affiliate of Uber Technologies Inc. is close to securing about $1 billion in new funding from investors in the region, part of the ride-hailing company’s rivalry with deep-pocketed Chinese rival Didi Kuaidi Joint Co. 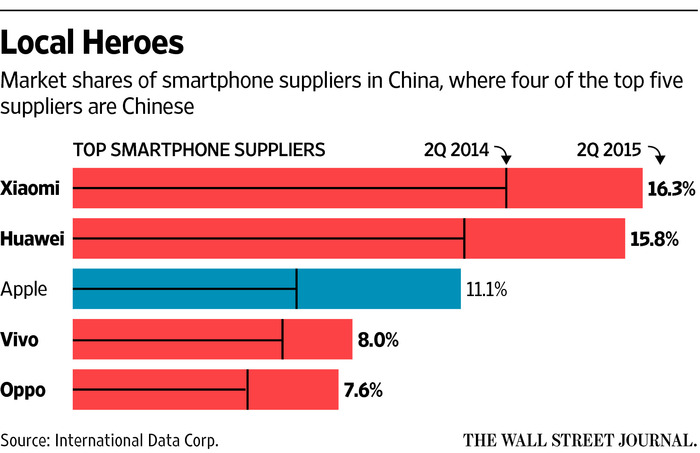 Investors have agreed to funding that would value UberChina at about $7.5 billion, according to a person familiar with the matter. The final paperwork has been signed but it could take several weeks for the round to officially close, the person said.

China also looms large for home-rental site Airbnb Inc., which has announced it would work with Sequoia Capital’s China arm and China Broadband Capital to expand in the country. The Chinese investment firm Hillhouse led Airbnb’s latest financing round, which valued the company at $25.5 billion based in part on big projections of future growth that may require substantial international expansion.

Developments in the Chinese market aren’t all bad for U.S. companies. The declining yuan, for example, could reduce the costs of goods they buy or manufacture there, helping their profit margins.

And not all U.S. companies face credible local competition. Intel Corp. and longtime rival Advanced Micro Devices Inc., for example, are the only companies that supply the kinds of processor chips used in PCs.

But Chinese companies are developing expertise in other chips, including cellular modems and another variety of processor found in most smartphones. That trend could pose a challenge to Intel’s attempts to penetrate the mobile market, and to mobile-chip leader Qualcomm Inc. ’s effort to defend its turf.

“The Chinese government has been very open and public about wanting to reduce their reliance on foreign silicon,” said Derek Aberle, Qualcomm’s president, in a recent interview.