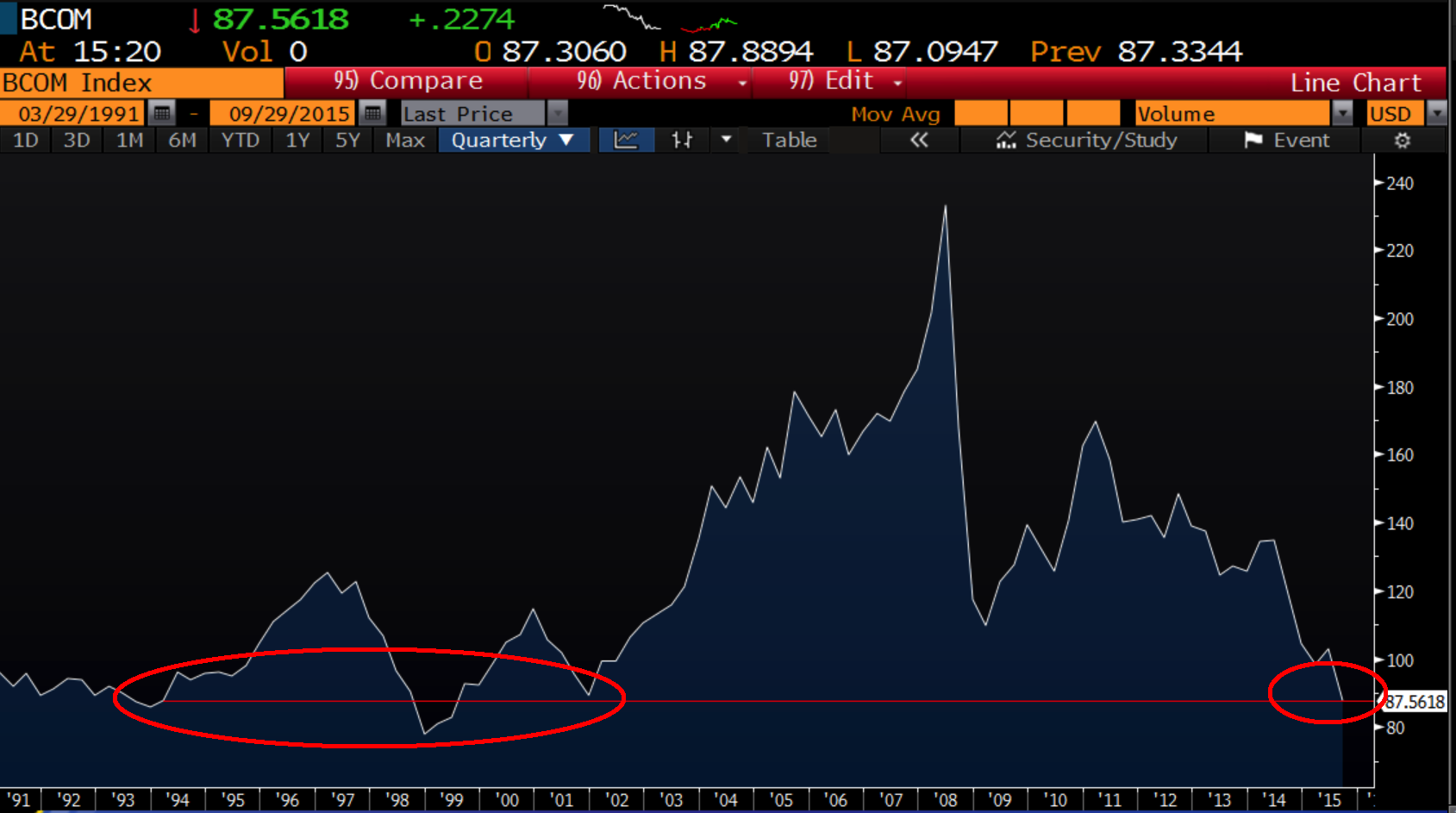 The chart above is the Bloomberg Commodity Index. It consists of baskets of common commodities, including energy, metals, foodstuffs, softs and precious metals.

After a fairly flat period in the 1990s, the index leapt upward beginning in the early 2000s. The context explains the jump: High inflation, weak dollar and low interest rates. From 2001 to 2007, the dollar lost 41 percent of its value, and all commodities priced in dollars skyrocketed. At the same time, China began a huge expansion of its infrastructure, transportation, housing and manufacturing sectors. The BCOM index moved from around 90 to almost 240.

You know the rest of the story: Inflation is nowhere to be found, and the Federal Open Market Committee is concerned about deflation. The dollar is at multiyear highs against just about any other currency. Commodity prices have suffered as a result.

Oil prices have been cut almost in half compared with a year ago, to $45 from $87. They are down more than 60 percent from the peak of about $150 barrel of the mid-2000s. The U.S. consumed 6.98 billion barrels in 2014, according to the U.S. Energy Information Administration. The silver lining is that current prices reflect a $42 per barrel savings from a year ago. If it holds, it could put almost $300 billion back in consumers' pockets. We have seen some early signs of that money being spent in recent retail sales.

But as the commodity index shows, this isn’t just about oil; just about all commodities have fallen across the board.

There are several reasons for the price contraction: Along with the strong dollar, excess supply, thanks to North American fracking, also is a contributor. Natural gas was trading Thursday morning at $2.488 per million British thermal units, and oil has cratered, too.

We shouldn't underestimate the impact of a slowing China on commodity prices. It has been on a huge building binge, a government planned overconsumption on an epic scale. When China, the world's biggest consumer of commodities, slows, commodity producers feel the pain.

According to data assembled by visual capitalist, China consumes 54 percent of the world’s aluminum production, 48 percent of all copper, 50 percent of nickel, 45 percent of steel and 60 percent of concrete. It has “consumed more concrete in the last three years than the United States did in all of the 20th century.”

China was one of the big reasons for the commodity surge in the 2000s. The country's growth has now been cut in half, and that's why prices are now back to the levels of the 1990s.