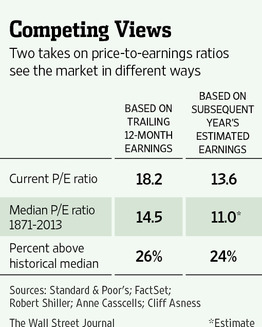 Which one of these statements is true?

Both are, thanks to quirks of the most popular way of measuring a stock's valuation: the price/earnings ratio.

While no one disagrees about what the "P" is when calculating the ratio, there is no consensus on how to define earnings-per-share. One of the biggest points of dispute: whether to use analysts' earnings estimates for the coming year or reported company earnings from the previous 12 months.

Comparing ratios calculated in these two ways is little better than comparing apples to oranges, according to Cliff Asness, managing partner at AQR Capital Management, an investment firm with $84 billion of assets under management. In an email, he went so far as to say that those who compare P/Es in this way are engaging in a "sleight of hand," though he allowed that many may "not be aware of the mistake they are making."

Consider the S&P 500's current P/E based on trailing earnings. For the four quarters through June 30, the index's earnings per share amounted to $91.13, according to S&P Dow Jones Indices. That translates into a P/E ratio of 18.2, which is higher than 79% of comparable readings since 1871, according to a database maintained by Yale University Professor, Robert Shiller.

Many bulls try to wriggle out from this bearish sign by focusing on estimated earnings.

According to FactSet Data Systems, the consensus forecast from Wall Street analysts is that earnings from companies in the S&P 500 will be $122.01 a share next year, which translates into a P/E ratio of 13.6. That is 6% less than the 14.5 median of historical P/Es in Mr. Shiller's database.

There is a catch: Forward-looking P/Es are almost always lower than those based on trailing earnings—often much lower. There are at least three reasons why, says Anne Casscells, a managing partner at Aetos Capital, which runs several hedge funds. First, corporate earnings usually rise from one year to the next. In addition, analysts' estimates focus on what's known as "operating earnings," a looser category than the actual reported earnings used to calculate the average of past P/Es.

And last but not least: Wall Street analysts' predictions tend to be way too optimistic.

These three factors conspire to make forward-looking P/Es 24% lower on average than those based on trailing earnings, according to a study by Mr. Asness and Ms. Casscells into the two types of P/Es from 1976 to 2003.

The stock market doesn't have to fall just because its P/E is above historical norms, of course. Ms. Casscells points out that the P/E ratio, like other valuation measures, exerts only a weak gravitational pull on the stock market's near-term direction. And it is always possible that "this time will be different," she says.

Still, a proper apples-to-apples comparison negates the bulls' argument that the current market is cheap, she contends.

The investment implication is that one might focus on ways to gradually reduce equity exposure rather than increase it. When you sell any of your shares, for example, don't automatically reinvest the proceeds from those sales in other stocks.

A related implication is that you should begin to shift toward more conservative holdings the portion of your stock portfolio you intend to hold through thick and thin. This means favoring companies with a larger stock-market value, little or no debt, a track record of consistently rising earnings and that hopefully pay a handsome dividend.

Examples are JNJ and PFE,  both of which are at the top of the most-recommended stock list among those advisers beating the market over the past 15 years, according to the Hulbert Financial Digest.

The two companies have much lower debt loads than the average S&P 500 company and relatively high dividends. Johnson & Johnson and Pfizer sport dividend yields of 2.9% and 3.3%, respectively, calculated by dividing the annualized equivalent of each firm's most recent dividend by its current stock price.

One mutual fund that invests in similarly tried-and-true companies is the Vanguard Dividend Growth fund. It also is at the top of the list of most recommended mutual funds among the 15-year market beaters. The mutual fund has an expense ratio of 0.29%, or $29 for every $10,000 invested.

Another fund that invests in similar stocks and is popular among the 15-year market beaters is the Vanguard Wellington Fund, with a 0.25% expense ratio.