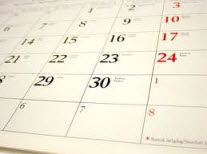 Hat tip to Stockchartist for lumping these all together in one handy place. The link to his blog at the bottom of the post. While he does leave out Presidential and mid-term election year theories as well as a few others, these are the basics you'll hear about as you learn to navigate the market.

For years I thought the key to investment success was good stock picking; find the right stocks and you're going to see your portfolio grow. Doesn't "you-know-who" continually say there's always a "bull market somewhere" and all you need to do is find it?

Actually, I, along many others, stopped drinking that cool-aide in 2003 after seeing retirement and savings investments shrink by about 40%. That's when I embraced another belief system. One based on the belief that the key to outstanding financial performance is successfully timing the market. "If you worry about the downturns, the uptrends will take care of themselves."

But there are all sorts of market timing techniques. Right now we're at the beginning of one called the "mid-term election year cycle". Over 80 years and 25 presidential elections, the stock market has followed a fairly definite course during the period surrounding the mid-term elections.

But there are other interesting calendar-based timing rules: