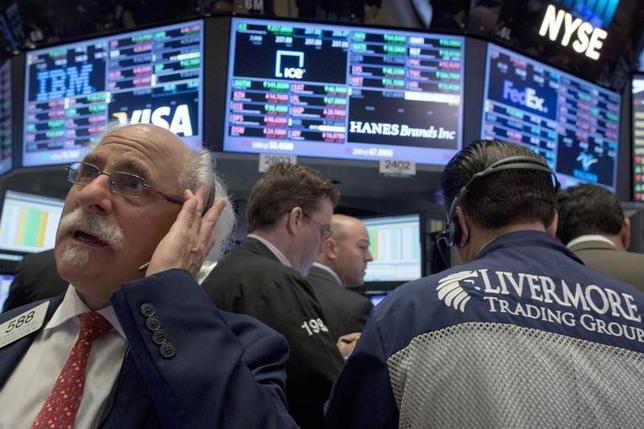 Investors may wade into unknown territory next month as the Federal Reserve readies the first rate hike in nearly a decade amid a corporate earnings recession.

S&P 500 earnings are on track to close their first reporting season of negative growth since the Great Recession and estimates call for sub-zero growth in the current quarter as well.

Even if the trend reverses next year, as expected, a Fed rate hike in December could mark an unprecedented conflict between a tightening cycle starting at the same time as earnings fall into recession.

"We can't think of any instances when the Fed was hiking during an (earnings) recession," said Joseph Zidle, portfolio strategist at Richard Bernstein Advisors in New York.

"In the last six months one can point at a lot of different things. But if you think about fundamentals, falling corporate profits and the threat of rising rates" are behind the market stalling, Zidle said.

With more than 90 percent of S&P 500 components having reported, S&P 500 earnings are down 0.9 percent in the third quarter. Absent surprisingly high numbers from the companies left to report, it will be the first negative growth quarter since the third quarter of 2009.

Fourth-quarter estimates are for a 2.4-percent earnings contraction, according to Thomson Reuters IBES data; that would set up the two quarters of declining earnings, required for a bona fide 'earnings recession.'

That already occurred in the second and third quarters, according to FactSet Research Systems, which calculates its quarterly results slightly differently than does Thomson Reuters.

Furthermore, the decline in revenue has been steeper than that in earnings, a bad sign for investors who like to put money into companies that are growing sales and not just cutting costs or buying back their own shares. Last quarter's sales are seen falling 4.3 percent and estimates for the current quarter are for a 2.7-percent decline.

It is hard to argue that those numbers correspond to an economy that is on the brink of becoming too hot and in need for monetary policy tightening.

The bulk of the S&P 500's earnings declines come from the energy and materials sectors as commodity prices have tumbled to multi-year lows.

The Fed, then, could be looking at the earnings decline as it does low inflation: a problem that will take care of itself once the declines fall out of the comparisons.

But if the Fed does decide to raise rates despite the gloomy earnings, that could hurt investors who may get whipsawed by the diverging cycles in the market and the economy.

Conventional wisdom calls for a defensive position - buying healthcare, staples and telecoms - when corporate profits are falling, and aggressively buying cyclicals like energy and materials at the start of a tightening cycle. Both are happening at the same time.

"Rising interest rates are always a negative for stocks, period," said RBA's Zidle. "In most (tightening) cycles, corporate profits are booming so much that the rise in profits is more than offsetting the drag of interest rates."

The Fed maintains its mantra of being data dependent when it comes to tightening monetary policy, and though it has strongly hinted of a December move, it also has acknowledged that it watches stock prices.

Investors are reacting accordingly: Last week the S&P 500 came within 1 percent of its record high set in May, but Friday it was on track to close its worst week in two months.

"Over the last couple years, every time this has happened the Fed has decided not to raise rates so we shall see if that cycle is broken in December."