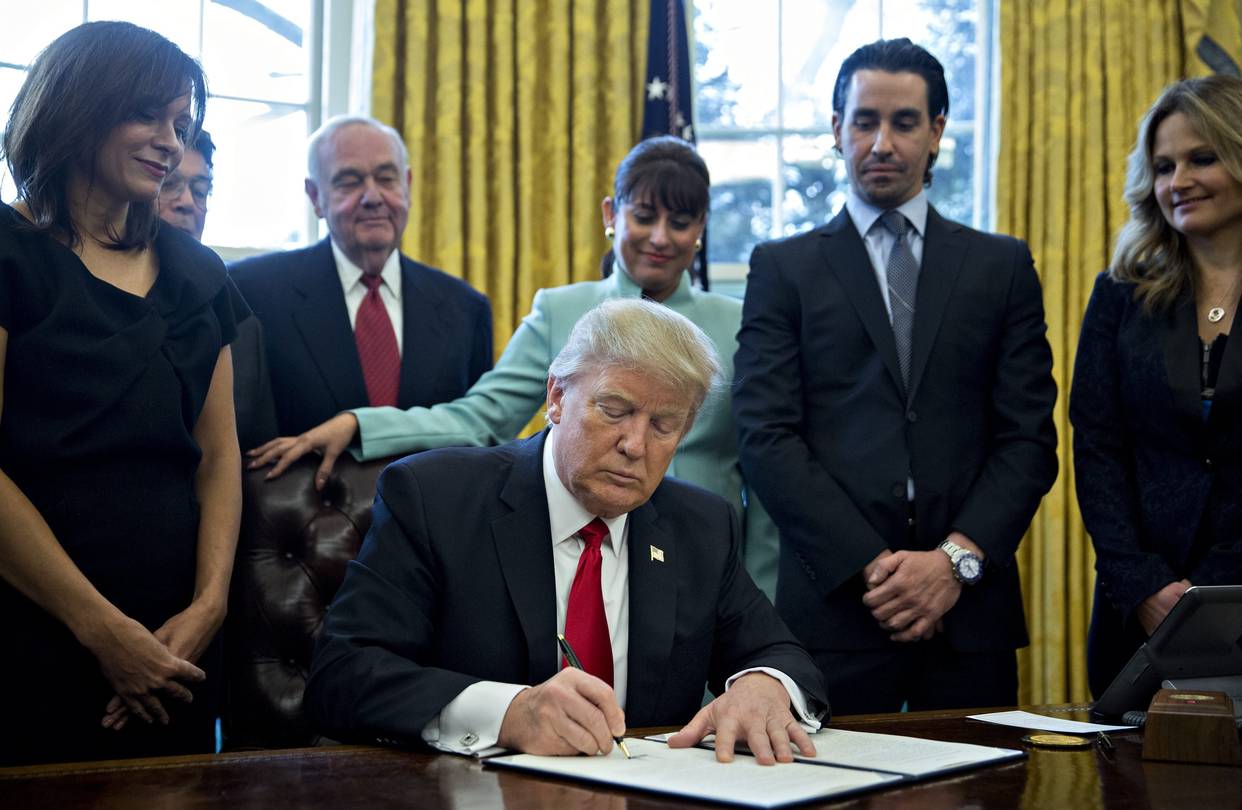 In a high-profile attack on growth-killing red tape, President Donald Trump this week ordered that any agency issuing a new rule find two to repeal.

He will likely discover that the only thing harder than getting something done in Washington is getting it undone.

Vast swaths of rules are untouchable because Congress ordered them to be written or the president himself demanded them. Finding rules to repeal is a tedious and time-consuming affair that usually yields tiny savings, mostly in reduced paperwork. Ultimately, rules are passed because they have benefits, from cleaner air to fewer terror attacks, that voters or presidents aren’t willing to forgo.

The first president to tackle the leviathan was Jimmy Carter who proposed a “regulatory budget” to limit the financial burden of new rules. Every president since has tried the same. George W. Bush invited suggestions from the public on rules to repeal. Barack Obama trumpeted two executive orders requiring federal agencies to “look back” and kill off old rules that no longer justified their cost.

None halted the relentlessly rising burden of regulation.

Perhaps Mr. Trump will be different, but history offers reason for skepticism.

In a sample of 50 of Mr. Obama’s “look-backs,” 76% achieved their savings by reducing administrative costs, such as converting to electronic from paper filing, according to Cary Coglianese, director of the University of Pennsylvania’s Penn Program on Regulation. Such costs are trivial compared with compliance, such as installing pollution abatement equipment or wheelchair ramps, and lost business opportunities. 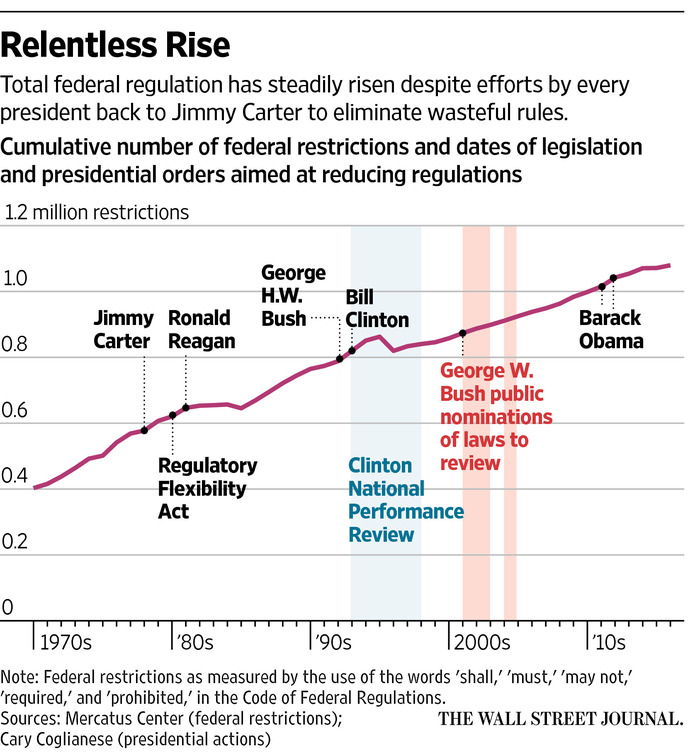 Often, the rules that get repealed “nobody cares about anymore: they aren’t imposing any costs at all because things have moved on,” Mr. Coglianese says. In 2004, for example, a rule protecting consumers from airlines’ deceptive airline ticket sales was repealed. It didn’t matter much because airlines no longer owned the major reservation systems.

Canada and Britain, which have versions of Mr. Trump’s “one in, two out” order, don’t offer much prospect for radical rollback.

“There were very few instances where we repealed regulation outright,” says Jitinder Kohli, who ran Britain’s regulatory overseer from 2005 to 2009 and is now with Deloitte Consulting. “It was very rare that the original intent of the regulation no longer made sense.”

More often, he said, there were more efficient ways to carry out the rule. Britain now mandates £3 of regulatory cost reduction for each pound of cost increase, yet its national auditor has found that costs are so poorly understood, it is unclear what good the government has achieved. For its part, Canada’s regulatory reduction program only covers paperwork costs.

Mr. Trump’s order requires the costs of any new rule be fully offset by repealed rules in any given year, but has yet to specify how to measure those costs. No cost estimate exists for many rules, and those that do haven’t been updated since the rules were passed.

Much of what business spends complying with a rule, such as designing more fuel-efficient cars, is “sunk,” and can’t be recovered. “The regulated party may even resist change,” says Susan Dudley, a Bush regulatory official and now director of the George Washington University Regulatory Studies Center. Dropping the requirement for air bags, for instance, won’t make car manufacturers stop installing them.

Mr. Trump’s order could provide a powerful prod to agencies to look for old, costly rules since, if they can’t find any, they may be unable to issue new rules. Even so, laws and courts can still demand that rules be written. Mr. Trump wants to repeal Mr. Obama’s Clean Power Plan. He would still be faced with a 2007 Supreme Court decision that the Environmental Protection Agency regulate carbon-dioxide emissions under the Clean Air Act.

There are more effective albeit less sexy ways to improve regulation: standardize the measure of both costs and benefits, force both Congress and federal agencies to submit laws and major new rules to independent cost-benefit analysis, then mandate a reassessment of the results several years later.

Yet the regulatory burden will likely keep growing so long as the priorities of Congress and the president require it. After the Sept. 11, 2001, terrorist attacks, Mr. Bush created an entire new federal department with thousands of new employees to counter terrorism. Mr. Obama’s health care and financial regulation laws required agencies to issue thousands of rules regardless of their costs and benefits.

Mr. Trump may not be not immune. He enacted a temporary ban on visitors from seven mostly Muslim countries over concerns that terrorists might enter the U.S. The president also suspended the U.S. refugee program for four months and reduced the number of refugees the U.S. will accept in fiscal year 2017 to 50,000. How would this perform on a cost-benefit test?

Alex Nowrasteh, an immigration expert at the libertarian Cato Institute, estimates the average American has a one in 3.6 billion chance each year of being killed by a refugee who becomes a terrorist, meaning there is a small benefit from the new rule. At the same time, he puts the cost of Mr. Trump’s order at $350 million per life saved since fewer immigrants make the workforce less efficient. By comparison, federal guidance usually puts the statistical value of a human life at $10 million.

Which simply proves that when a president’s priorities are at stake, the cost of regulation is seldom an object.