We are having a hard time finding high-quality companies at attractive valuations.

For us, this is not an academic frustration. We are constantly looking for new stocks by running stock screens, endlessly reading (blogs, research, magazines, newspapers), looking at holdings of investors we respect, talking to our large network of professional investors, attending conferences, scouring through ideas published on value investor networks, and finally, looking with frustration at our large (and growing) watch list of companies we’d like to buy at a significant margin of safety. The median stock on our watch list has to decline by about 35-40% to be an attractive buy.

But maybe we’re too subjective. Instead of just asking you to take our word for it, in this letter we’ll show you a few charts that not only demonstrate our point but also show the magnitude of the stock market’s overvaluation and, more importantly, put it into historical context.

Each chart examines stock market valuation from a slightly differently perspective, but each arrives at the same conclusion: the average stock is overvalued somewhere between tremendously and enormously. If you don’t know whether “enormously” is greater than “tremendously” or vice versa, don’t worry, we don’t know either. But this is our point exactly: When an asset class is significantly overvalued and continues to get overvalued, quantifying its overvaluation brings little value.

Let’s demonstrate this point by looking at a few charts.

The first chart shows price-to-earnings of the S&P 500 in relation to its historical average. The average stock today is trading at 73% above its historical average valuation. There are only two other times in history that stocks were more expensive than they are today: just before the Great Depression hit and in the1999 run-up to the dotcom bubble burst. 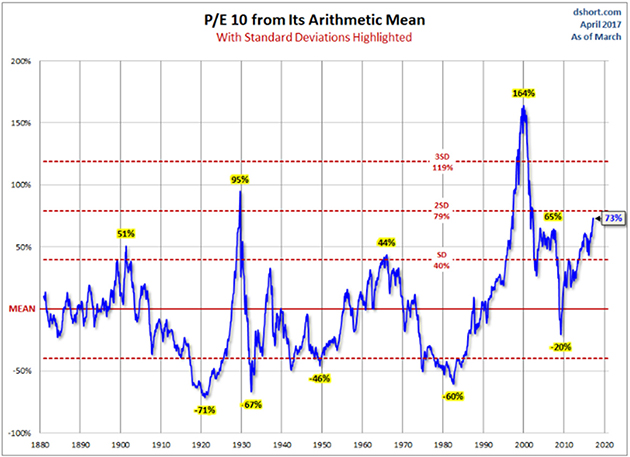 We know how the history played in both cases – consequently stocks declined, a lot. Based on over a century of history, we are fairly sure that, this time too, stock valuations will at some point mean revert and stock markets will decline. After all, price-to-earnings behaves like a pendulum that swings around the mean, and today that pendulum has swung far above the mean.

What we don’t know is how this journey will look in the interim. Before the inevitable decline, will price-to-earnings revisit the pre-Great Depression level of 95% above average, or will it maybe say hello to the pre-dotcom crash level of 164% above average? Or will another injection of QE steroids send stocks valuations to new, never-before-seen highs? Nobody knows.

One chart is not enough. Let’s take a look at another one, called the Buffett Indicator. Apparently, Warren Buffett likes to use it to take the temperature of market valuations. Think of this chart as a price-to-sales ratio for the whole economy, that is, the market value of all equities divided by GDP. The higher the price-to-sales ratio, the more expensive stocks are. 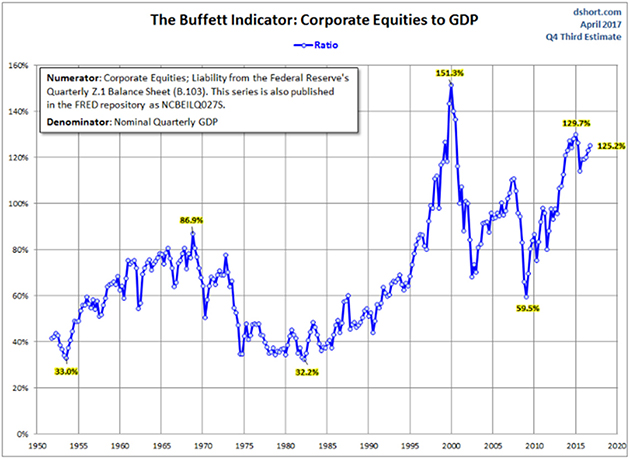 This chart tells a similar story to the first one. Though neither Mike nor Vitaliy were around in 1929, we can imagine there were a lot of bulls celebrating and cheerleading every day as the market marched higher in 1927, 1928, and the first eleven months of 1929. The cheerleaders probably made a lot of intelligent, well-reasoned arguments, which could be put into two buckets: first, “This time is different” (it never is), and second, “Yes, stocks are overvalued, but we are still in the bull market.” (And they were right about this until they lost their shirts.)

Both Mike and Vitaliy were investing during the 1999 bubble. (Mike has lived through a lot of more bubbles, but a gentleman never tells). We both vividly remember the “This time is different” argument of 1999. It was the new vs. the old economy; the internet was supposed to change or at least modify the rules of economic gravity – the economy was now supposed to grow at a new, much faster rate. But economic growth over the last twenty years has not been any different than in the previous twenty years – no, let us take this back: it has actually been lower. From 1980 to 2000 real economic growth was about 3% a year, while from 2000 to today it has been about 2% a year.

Finally, let’s look at a Tobin’s Q chart. Don’t let the name intimidate you – this chart simply shows the market value of equities in relation to their replacement cost. If you are a dentist, and dental practices are sold for a million dollars while the cost of opening a new practice (phone system, chairs, drills, x-ray equipment, etc.) is $500,000, then Tobin’s Q is 2. The higher the ratio the more expensive stocks are. Again, this one tells the same story as the other two charts: Stocks are very expensive and were more expensive only twice in the last hundred-plus years. 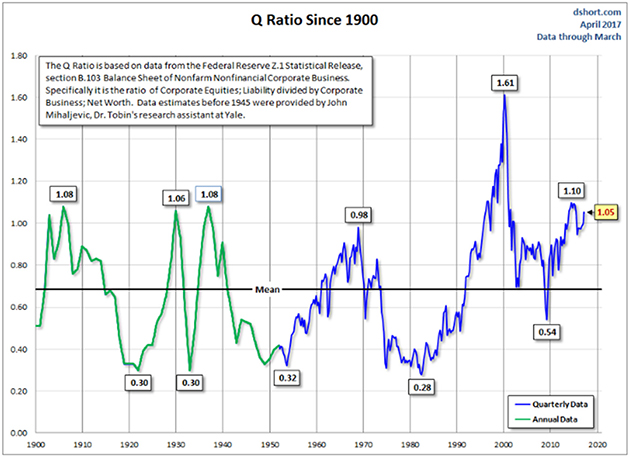 What will make the market roll over? It’s hard to say, though we promise you the answer will be obvious in hindsight. Expensive markets collapse by their own weight, pricked by an exogenous event. What made the dotcom bubble burst in 1999? Valuations got too high; P/Es stopped expanding. As stock prices started their decline, dotcoms that were losing money couldn’t finance their losses by issuing new stock. Did the stock market decline cause the recession, or did the recession cause the stock market decline? We are not sure of the answer, and in the practical sense the answer is not that important, because we cannot predict either a recession or a stock market decline.

In December 2007 Vitaliy was one of the speakers at the Colorado CFA Society Forecast Dinner. A large event, with a few hundred attendees. One of the questions posed was “When are we going into a recession?” Vitaliy gave his usual, unimpressive “I don’t know” answer. The rest of the panel, who were well-respected, seasoned investment professionals with impressive pedigrees, offered their well-reasoned views that foresaw a recession in anywhere from six months to eighteen months. Ironically, as we discovered a year later through revised economic data, at the time of our discussion the US economy was already in a recession.

We spend little time trying to predict the next recession, and we don’t try to figure out what prick will cause this market to roll over. Our ability to forecast is very poor and is thus not worth the effort.

An argument can be made that stocks, even at high valuations, are not expensive in context of the current incredibly low interest rates. This argument sounds so true and logical, but – and this is a huge “but” – there is a crucial embedded assumption that interest rates will stay at these levels for a decade or two.

Hopefully by this point you are convinced of our ignorance, at least when it comes to predicting the future. As you can imagine, we don’t know when interest rates will go up or by how much (nobody does). When interest rates rise, then stocks’ appearance of cheapness will dissipate as mist on the breeze.

And there is another twist: If interest rates remain where they are today, or even decline, this will be a sign that the economy has big, deflationary (Japan-like) problems. A zero interest rate did not protect the valuations of Japanese stocks from the horrors of deflation – Japanese P/Es contracted despite the decline in rates. America maybe an exceptional nation, but the laws of economic gravity work here just as effectively as in any other country.

Finally, buying overvalued stocks because bonds are even more overvalued has the feel of choosing a less painful poison. How about being patient and not taking the poison at all?

You may ask, how do we invest in an environment when the stock market is very expensive? The key word is invest. Merely buying expensive stocks hoping that they’ll go even higher is not investing, it’s gambling. We don’t do that and won’t do that.