Tranquility that has enveloped global markets for more than two months was upended as central banks start to question the benefits of further monetary easing, sending government debt, stocks and emerging-market assets to the biggest declines since June. The dollar jumped.

The S&P 500 Index, global equities and emerging-market assets tumbled at least 2 percent in the biggest rout since Britain voted to secede from the European Union. The yield on the 10-year Treasury note jumped to the highest since June and the greenback almost erased a weekly slide as a Federal Reserve official warned waiting too long to raise rates threatened to overheat the economy. German 10-year yields rose above zero for the first time since July after the European Central Bank downplayed the need for more stimulus. 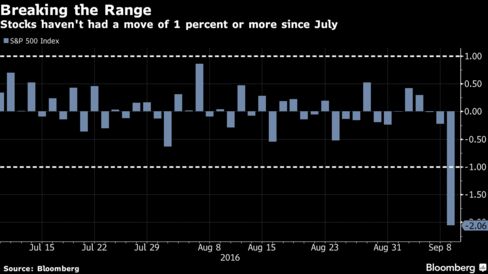 Fed Bank of Boston President Eric Rosengren’s comments moved him firmly into the hawkish camp, sending the odds for a rate hike this year above 60 percent. He spoke a day after ECB President Mario Draghi played down the prospect of an increase in asset purchases, while DoubleLine Capital Chief Investment Officer Jeffrey Gundlach said it’s time to prepare for higher rates.

“Dovish Fed members getting called up to bat for a hike is putting people on edge,” Yousef Abbasi, a global market strategist at JonesTrading Institutional Services LLC, said by phone. “The more hawkish-leaning investors are grabbing onto that and it’s certainly one of those days where people are positioning for that September hike being back on the table.”

Calm had dominated financial markets in late summer with equity volatility and bond yields near historic lows and measures of cross-asset correlation at the highest levels since at least the financial crisis. The rise in the influence of different markets on each other has been attributed to the growing impact of central bank policy on prices, and rising concern that the era of easing may be nearing an end roiled assets from bonds to currencies and stocks on Friday.

Concerted declines of this size in stocks and bonds are rare though not unheard of, and are usually associated with central bank hawkishness. Adding up the percentage losses in the SPDR S&P 500 ETF and the iShares 20+ Year Treasury Bond ETF, the last time the moved in a similar manner was Dec. 3, 2015, when Fed Chair Janet Yellen indicated the conditions for higher rates in the U.S. had been met.

The last time the two ETFs each posted declines comparable in size to today’s was June 20, 2013, the start of the so-called taper tantrum, when then-Chair Ben S. Bernanke said the Fed may start reducing bond purchases that had fueled gains in markets globally.

Shares of defensive stocks led declines on U.S. exchanges as trades that investors piled into in search of dividend yields reversed amid the spike in Treasury rates. Utilities and phone stocks plunged more than 3.4 percent, while real-estate investment trusts tumbled 3.9 percent. Financials, which benefit from rising interest rates, were the best performers in the S&P 500 with a drop of 1.9 percent.

The MSCI Emerging Markets Index fell for the first time in six days, losing 2.2 percent, as stock indexes from Brazil to Poland tumbled at least 2.2 percent and benchmark gauges in Taiwan, Indonesia, the Philippines and Poland lost more than 1 percent. The Kospi index slid 1.3 percent in Seoul after North Korea conducted its fifth nuclear arms test.

Your cheat sheet on life, in one weekly email.
Get our weekly Game Plan newsletter.
Draghi’s reticence accelerated a selloff in bonds that extended from Europe to the U.S. and Japan, with longer-dated securities, which have been outperforming in recent months, being the hardest hit. While yields are still low compared with historical averages, they are quickly rising from records reached earlier this year, recalling the bond rout of 2015, which saw German 10-year yields climb more than a percentage point in less than two months.

Chances of the Fed raising rates at the September meeting climbed to 38 percent, up 16 percentage points from Wednesday, according to fed funds futures.

The U.K. and Japan, two markets which have help drive the global bond rally this year, also saw losses. The yield on 10-year gilts rose to a one-month high of 0.84 percent and the Japanese 10-year yield, which has been below zero since March, climbed to minus 0.02 percent.

The dollar climbed for a third day while emerging market currencies from South Africa to Brazil to Mexico plunged as traders boosted bets on an interest-rate increase. The Bloomberg Dollar Spot Index, which tracks the greenback against 10 major peers, rose 0.5 percent. The U.S. currency gained 0.3 percent to $1.1229 per euro and was up 0.2 percent to 102.68 yen.

The Canadian dollar fell as an above-forecast gain in August jobs wasn’t seen as strong enough to reverse Bank of Canada policy makers’ concern that risks to economic growth have increased.

Oil fell the most in five weeks after the biggest U.S. stockpile slump in 17 years was seen as a one-off caused by a tropical storm that disrupted imports and offshore production. West Texas Intermediate dropped $1.74 to settle at $45.88 a barrel, paring the weekly increase to 3.2 percent.

Gold futures fell for a third day, dropping 0.5 percent to settle at $1,334.50 an ounce in New York. It was the longest slide since July 12. Higher rates make bullion less competitive against interest-bearing assets.