When EBAY was blow torched this week after AAPL unveiled Apple Pay at their investor event on September 7th, I saw the knee-jerk fear that Apple Pay would take down PayPal as one to raise an eyebrow, however considering the possible number of iphone6 and Apple watch sales (because it won't be available on current Apple products) versus worldwide usage of PayPal, this would not something that would immediately destroy the EBAY name.  On Wednesday I jumped in on EBAY calls (cheap at that point) feeling the reaction was over done.

Booyah!  Was I glad today that I did.  Dumb luck is definitely better than no luck at all.

Not only are other market participants now beginning to question the depth of impact from Apple Pay (again only available on the new iPhone6 or Apple Watch), but it's overall security in a day and age of endless hackers when it comes to one's digital wallet replacing their plastic card and cash. 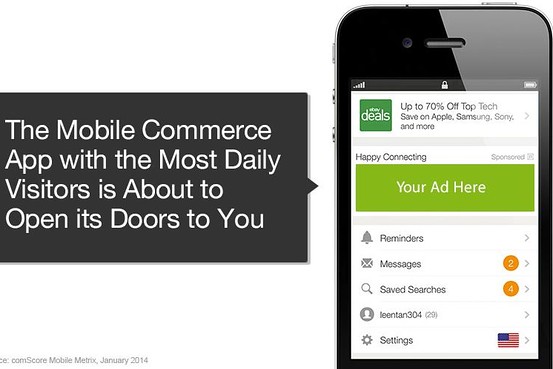 Then today the news hit when EBAY announced they are set to launch an advertising network for its mobile app in this year’s final quarter, opening up a new avenue for marketers to reach the app’s roughly 4.6 million daily visitors.  “We know what these people bought, what they looked for, what they want to buy,” said Howard-Sarin. “We know exactly who the users are, so we know that the targeting will be relevant.”

By partnering with eBay, advertisers will have access to over 60 predefined audience segments, all powered by eBay's real commerce data.  With 149 million active users and 290 million hours of shopping activity each month according to their site, this step into advertising is nothing to sneeze at.

Market researcher eMarketer estimates spending worldwide on mobile advertising will nearly double this year to $32.7 billion this year, from $17.7 billion last year. The firm said it expects U.S.-based marketers to devote 37% of their spending toward mobile devices in 2014.

AMZN has been seeking to revamp its advertising, quietly working on a new network that could take on Google AdWords for search-related marketing and Facebook has already ventured into converting their user data into targeted advertising.  Now enter eBay.

The new network could help marketers more accurately target their advertising because the app requires a log-in, meaning eBay knows about users’ activity within the app, said Stephen Howard-Sarin, eBay’s head of display advertising, in an interview.  “For the first time, we’re giving you the opportunity to connect with eBay users throughout their entire shopping journey,” eBay said on a new page on its website. The company said that eBay users spend 150 minutes on its app per month, compared with 47 for its nearest, unidentified competitor.

The website said eBay can place advertisements across multiple mobile devices, including smartphones and tablets. EBay is working with St. Petersburg, Fla.-based Triad Retail Media to place the advertisements, according to the site.